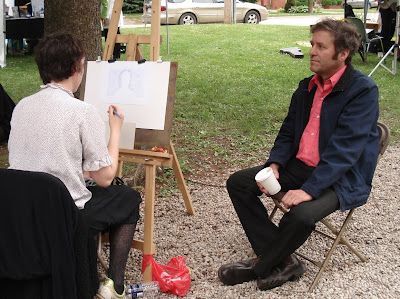 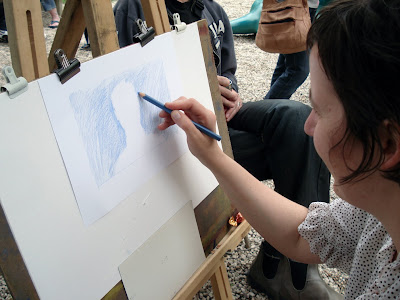 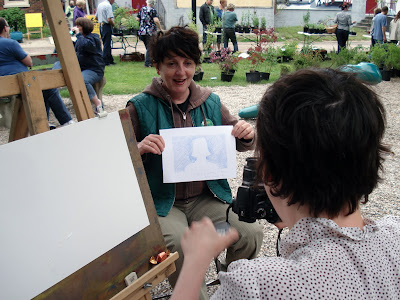 Suggest a profile picture is a variation of emoticonize me (2009). Once again I perform as a street portrait artist referring to the imagery of an online social network. Pretending to portray people while drawing a default profile picture, my aim is to play with notions of self-expression and individuality.

"Suggest a profile picture" appears as an option below the default profile picture on a facebook profile page. Those users who did not choose to upload a profile picture are represented by the white silhouette of a male or female head on a light blue background. It may seem they didn't care about the opportunity to stand out visually. A former facebook default picture used to show a question mark, thus somehow pointing out that the lack of a profile picture was a flaw.

By staging a street portrait artist performance I attempt to shift ideas of individual expression online and in the so-called real world. While persons sit patiently in anticipation of a unique hand drawn portrait by an artist, they receive an unique hand drawn facebook default profile picture. Though I try to render the proportions and outlines of the head as accurate as possible, every picture looks different. The portrayed persons might upload the drawing on their facebook profile and receive a quasi semi-individual profile picture.

Who says it takes two to party 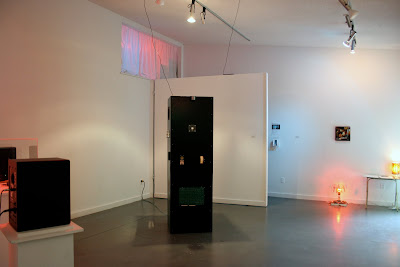 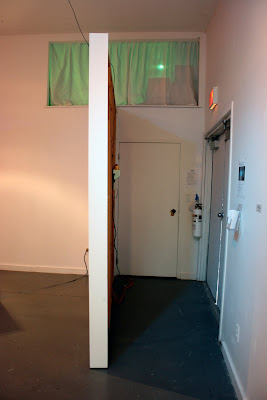 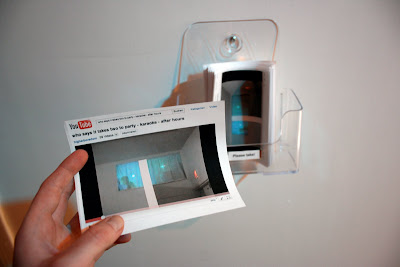 I developed this project during an artist residency at the Common Pulse Festival (Durham, Ontario, Canada). Five artists were asked to produce works which would be connected by a common pulse signal.

My idea occured as a reaction to the architecture of the gallery. I utilized an elevated storage room with an opening towards the exhibition space for a light installation. Red, green and blue light spots - blinking to the common pulse – were visible through a white curtain.

Besides the installation's physical connection to the common pulse I attempted to give it the appearance of a mysterious party room. In preparation for the exhibition I recorded myself performing karaoke inside the insallation. I deliberately chose classic pop songs about loneliness, alienation and isolation.

Instead of displaying the documentation of the one-woman-party during the exhibiton I uploaded the clips on Youtube and presented flyers showing a screenshot. By making it more difficult to capture the artwork at large my intention was to deal with self-expression and self-exposure during a performance considering the significance of online social networks. Shifiting the possibility to view my performance to some place outside the exhibition space increases and decreases the voyeuristic aspect at the same time.